These delicious caramelized leeks, braised in butter, thyme, and broth, are a seasonal side dish that’s full of winter flavors. Topped with a simple pomegranate, orange, and ginger relish, this vegetarian leek recipe is both beautiful and tasty.

Where have caramelized leeks been all my life?! Seriously, though, this new recipe is simply AMAZING.

I give a lot of attention to onions on the blog, but leeks don’t have nearly enough posts in my opinion. You may think that they’re pretty much just another variation of an onion. However, leeks have a lot to offer on their own.

When prepared the right way, aka when they’re caramelized like in this recipe, leeks have a velvety, melt-in-your-mouth texture. Caramelized leeks taste delicious on their own, but I brought them up a notch with a fun topping.

Grated ginger and orange zest, coupled with pomegranate arils, orange juice, and honey, brings this simple side dish to the next level. But the best part is that these leeks aren’t just for special occasions or holidays, even though they appear fancy and special. You can make them any night of the week!

How to Make Caramelized Leeks

The process for making braised leeks, cooked in butter, is very simple! Just grab a skillet, preferably a cast iron one, a lid, and the ingredients. That’s right, you can skip the oven.

Caramelized leeks taste delicious with a roast, pork tenderloin, or fish. You can also serve them with my Slow Cooker Mushroom and Barley Stew or Roasted Kohlrabi Steaks with Mushroom Sauce. They go well with meaty, savory main dishes.

For other delicious recipes that use leeks, check out the Potato Leek Pizza on Pita, Braised Radishes and Leeks, and the Lemon Braised Leeks and Quinoa Salad. 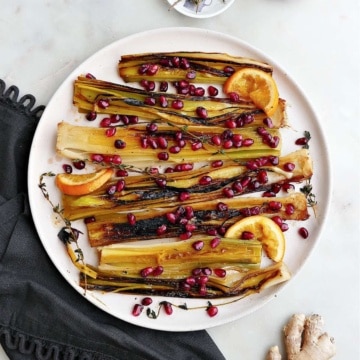 Have a great weekend! – Lizzie

« How to Prepare Fennel (with video!)
Vegan Carrot Banana Muffins »