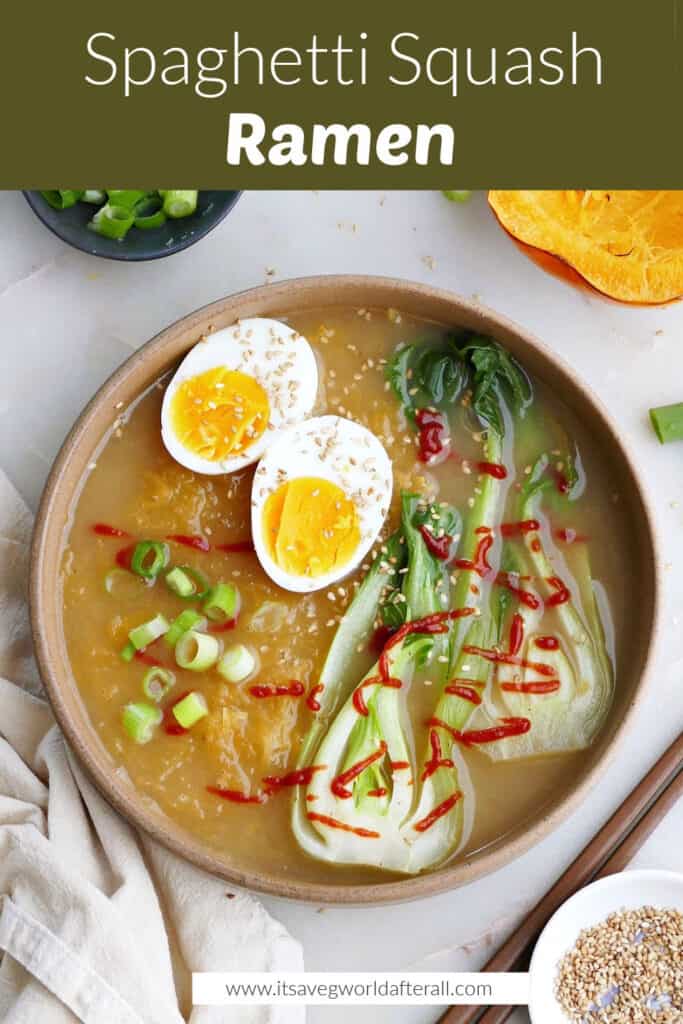 This comforting vegetarian Spaghetti Squash “Ramen” is the perfect meal for a cold night! It’s a healthy ramen alternative that’s nourishing and flavorful, thanks to a dried mushroom broth, miso paste, soy sauce, rice vinegar, and fresh bok choy. Please note that this recipe is not intended to mimic or be claimed as traditional Japanese ramen and is instead a twist that is inspired by the delicious flavors of that dish.

About a year ago, I received a text from a friend asking for a Veg World creation using healthy ramen noodles. I loved this idea so much that I immediately put spaghetti squash “ramen” on my content calendar for the winter. This friend also happens to live in the Midwest, so she knows how important it is to have some warm, healthy comfort food recipes in your back pocket for January and February!

If you aren’t familiar with ramen, it’s a Japanese dish made of noodles and broth. It has some floating vegetables, plenty of seasonings and may be served with a jammy egg on top. For more information on the history of ramen, please refer to this Japanese Ramen Guide for Beginners.

In true Veg World fashion, I used spaghetti squash for this “ramen” recipe. It’s a low carb alternative to wheat ramen noodles that adds an extra boost of fiber, B vitamins, and potassium.

But the best part about this veggie-based recipe is the broth. Ramen broth is comforting, savory, a little salty, and downright nourishing, and I attempted to create a vegetarian broth with all of these features. Thanks to flavor from dried mushrooms, miso, onion, garlic, and ginger, it goes down REAL easy. 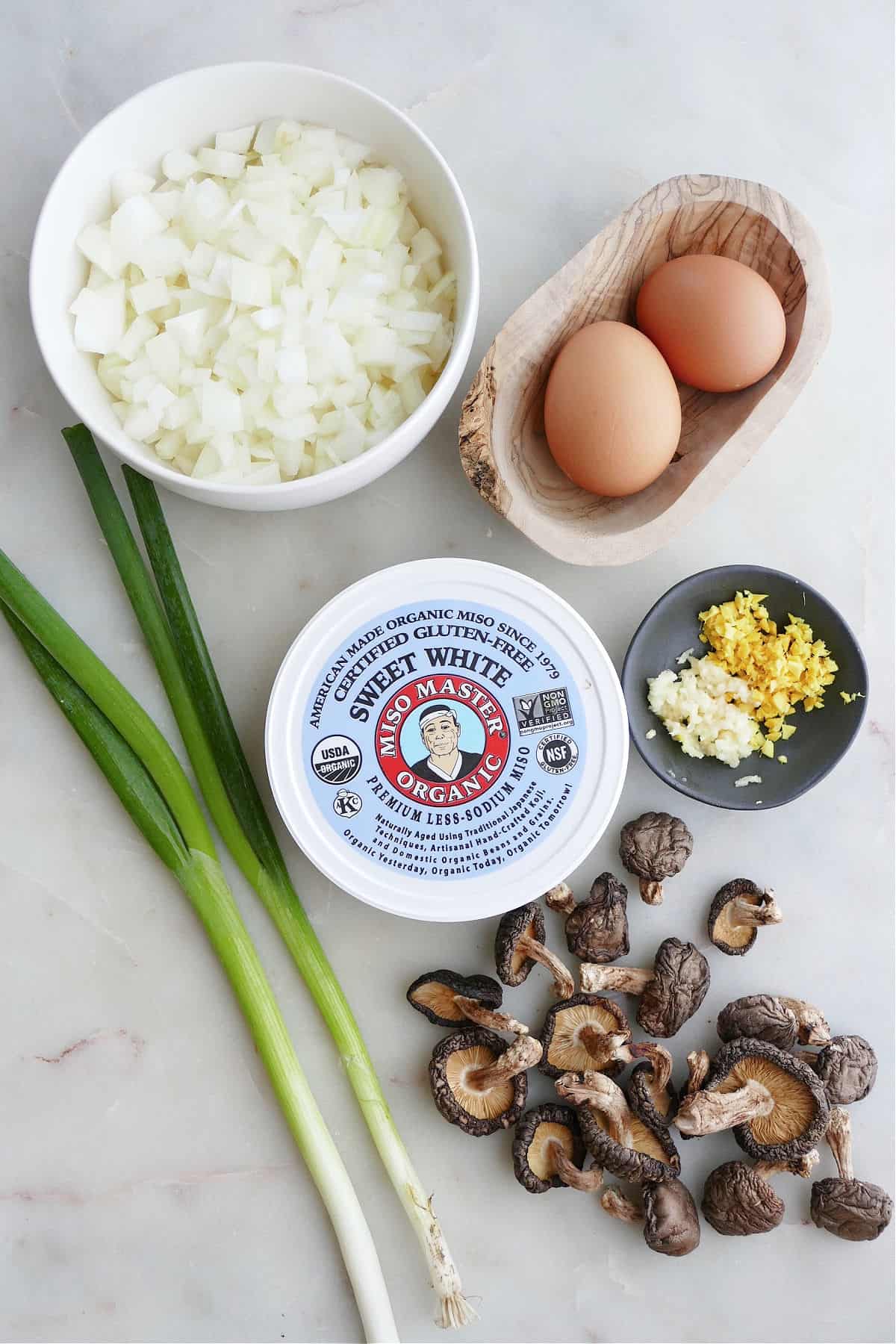 How to Make Spaghetti Squash “Ramen” 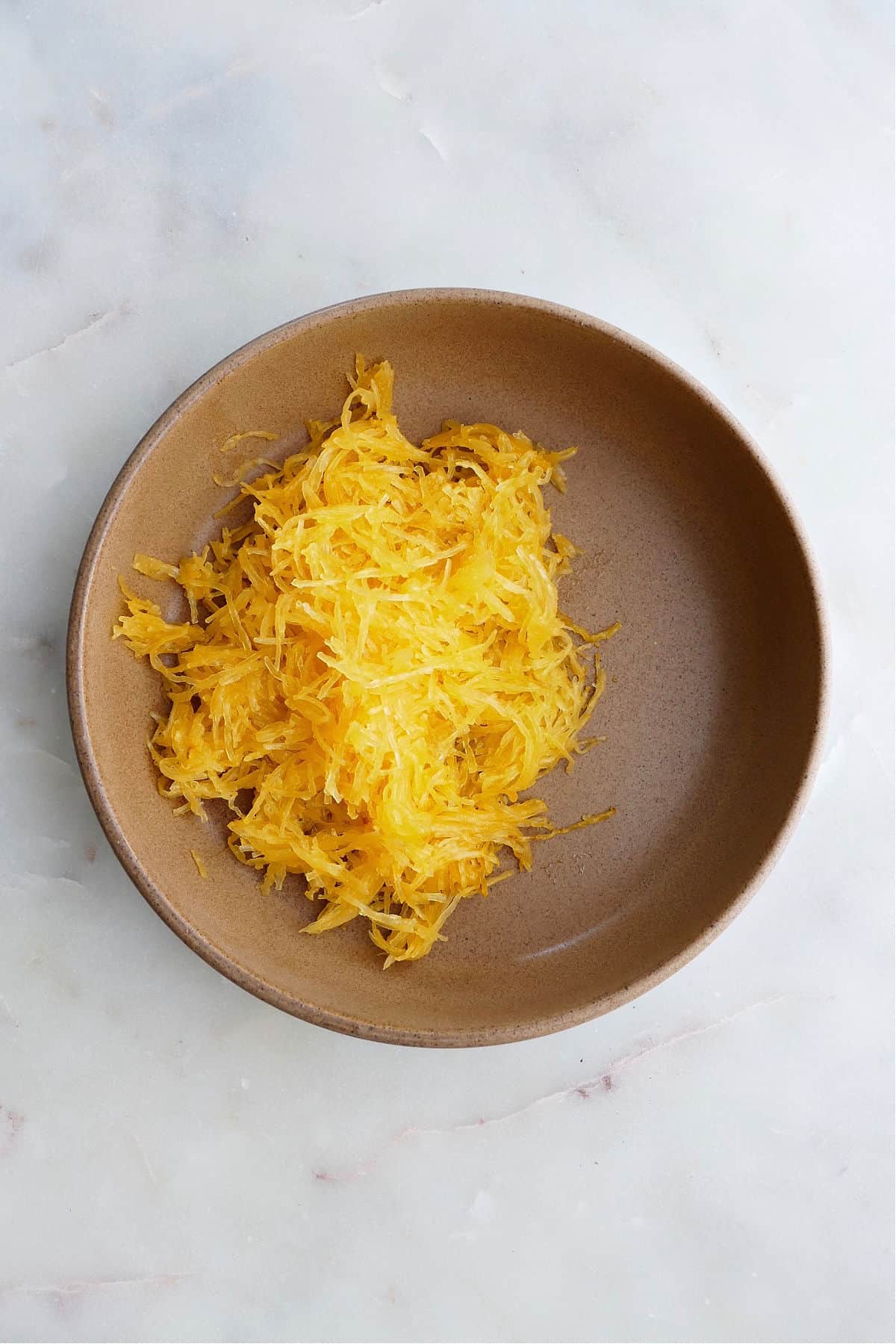 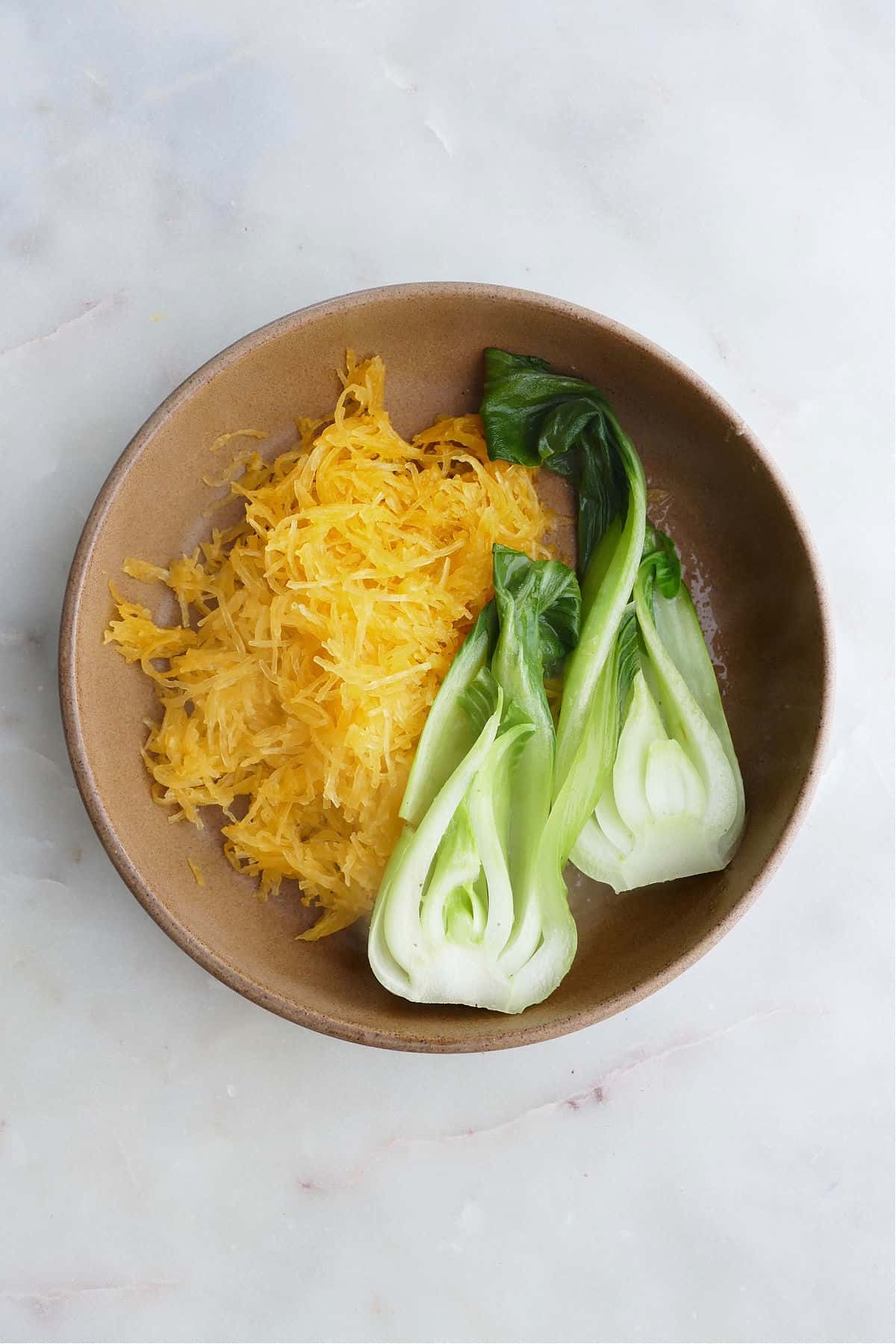 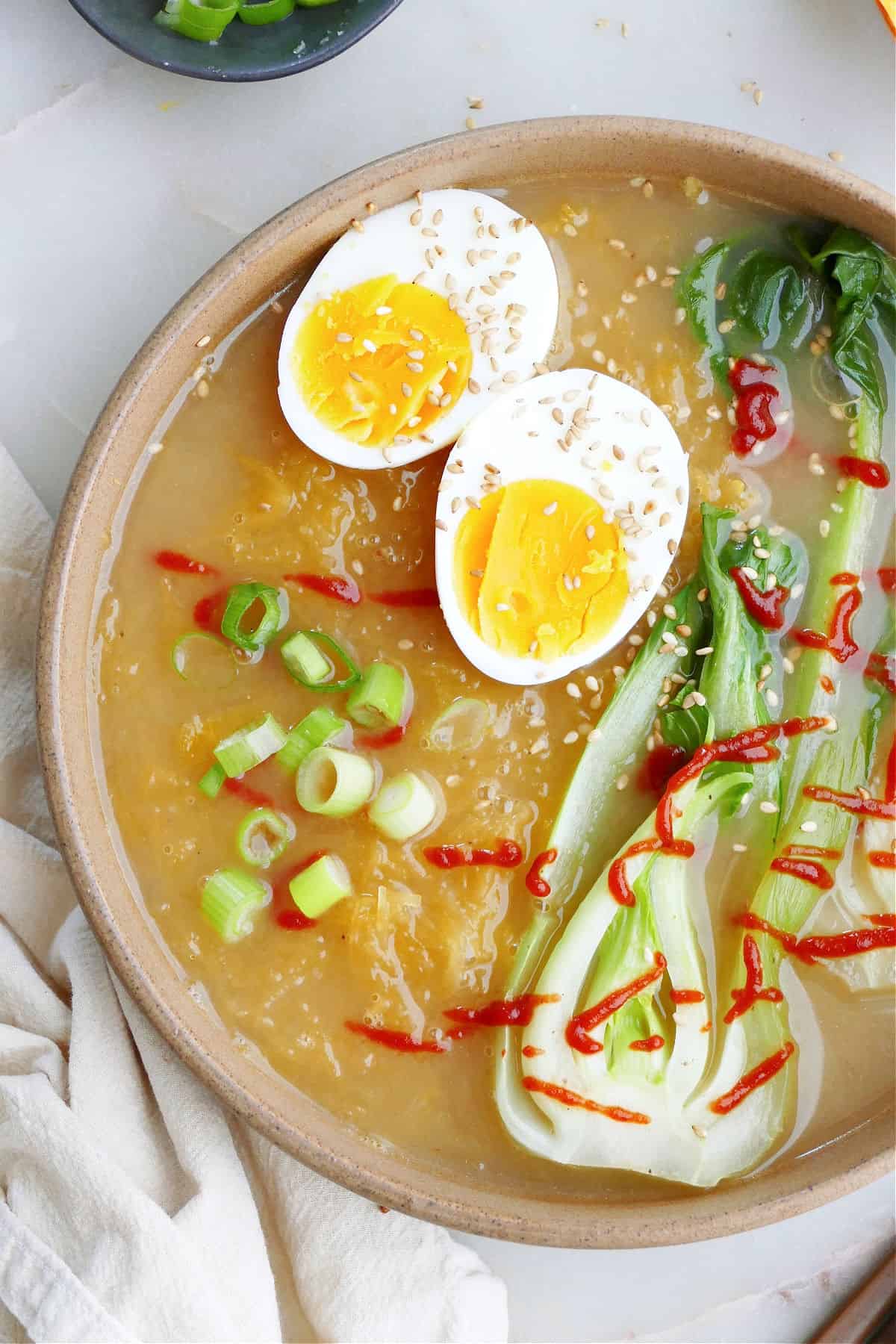 A great thing about homemade ramen is that it’s highly customizable! My preferred toppings are sliced green onions, toasted sesame seeds, an egg, bok choy, and Sriracha. However, feel free to switch it up based on your preferences.

You may enjoy other veggies, like steamed spinach or sautéed mushrooms, in your ramen. If you want more spice, add a heavier drizzle of hot sauce. 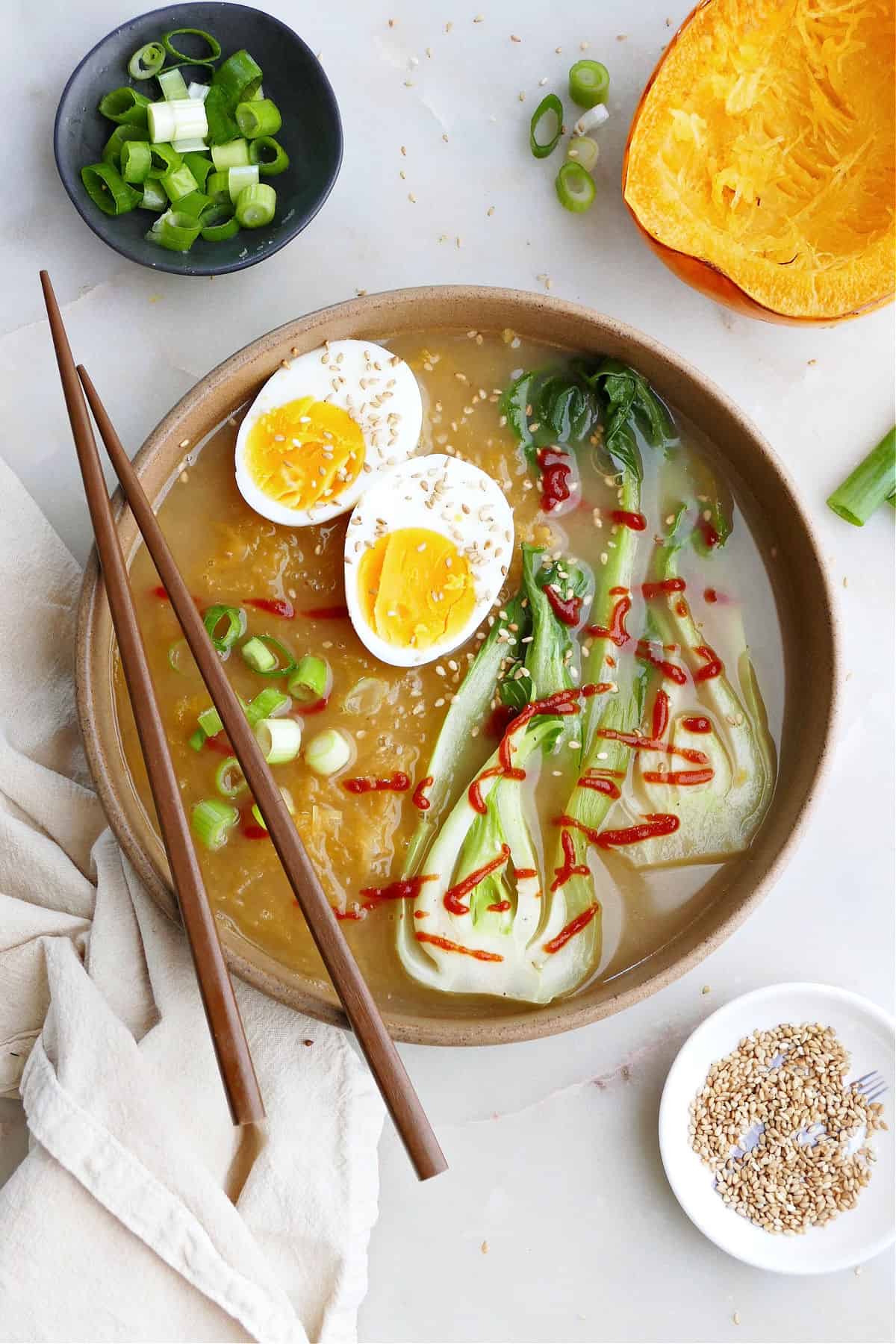 And don’t forget to let me know how you like it in the comments below! Rate and review using the stars on the recipe card. I’d love to hear from you. 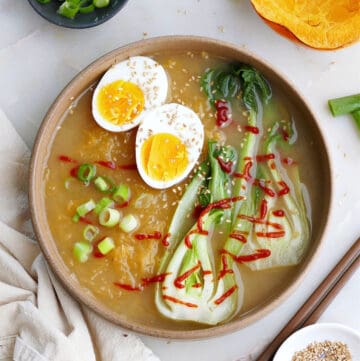 This Spaghetti Squash “Ramen” was originally published in January 2019. It was updated with new photos, ingredients, and tips in February 2021.